His professor's request to accession the films for the Cinémathèque du Rhin supérieur and appraisal of  their value:

My name is Alexander Sumpf and I am the Associate Professor at the University of Strasbourg who asked Paul Anthony to analyze your father's films.

When Paul spoke to me about these films, I was very struck by the technical mastery and artistry of this very young amateur cinematographer; what he [Paul] taught me

by his research confirmed my opinion that we have here an exceptional destiny and irreplaceable sources for history.

For the last two years I have been in charge of a European program, Rhinedits, that collects amateur films on Alsace [France] and the Bade-Wurtembourg [Germany.]

For the past year, the films we selected and digitized have been shown onlin on the dedicated web site for the Cinemathèque du Rhin Supérieur.....

We would very much like to present to young Alsatians of today the important and too-little known picture of their past, and restore a part of their erased memory. Thus,

through the destiny of the Levy family, it is the history of emigration to the US and that of the Jews of Alsace that is brought back, in all its strength and beauty.

Your father's films have no equal in our collection because no vision has reached us from so far back, with such acuity and familiarity of people rediscovering  not only

their family but their "Little homeland" when they came back to France. What's more, we have no other picture of Ingwiller and of its synagogue.

That is why we are asking for the authorization that you gave to the USHMM [US Holocaust Memorial Museum] tp place the films, with commentary by Paul Anthony,

in our online Cinemathèque. I believe that these splendid images and your father's unusual destiny would reach a new audience. It also seems very important to me that

to affirm that the Jews are an integral part of the region's history, where anti-semitic acts have recently increased against other places of memory - their cemeteries.

I hope that you will have time to tour our site- see for example the marraige of Etienne Klein in Strasbourg in 1949, on of the first to have been celebrated after the

catastrophe of the war, in the temporary synagogue.... 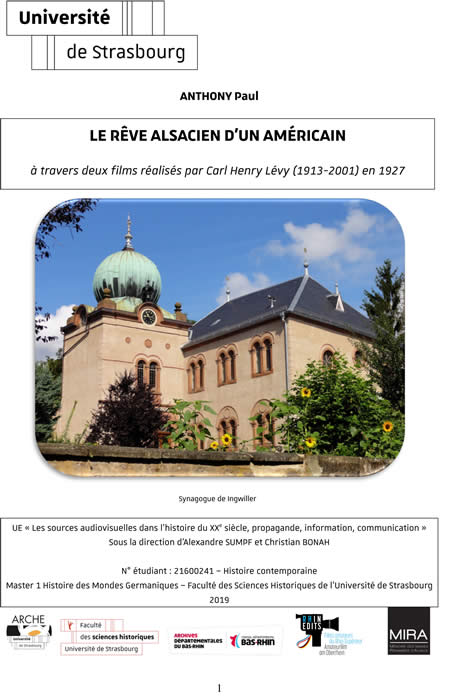